Skip to content
Happy Teacher Appreciation Week! To celebrate, my shop is 25% off with the code, THANKYOU22. 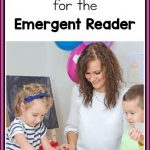 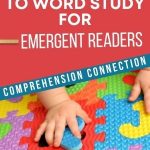 You might think that word study would be implemented beginning in first grade, but that is not the case. Our emergent readers are part of the reader continuum, and phonological awareness and phonics are a critical part of reading instruction at the emergent level. What does it look like? Well, one might think of it as word play, but there is a systematic progression even for our youngest learners.

Pre-readers who know some of the alphabet and use the names of letters begin to connect the letter name and symbol to the sound it makes, right. Well, the focus at this stage is that connection between print and sound. We want them to be able to isolate and identify the initial sound of B for /b/ump or J for /j/am). We use chants, picture and object sorts, rhyming games, and activities such as these to address the beginning sounds of words. Gradually, as the pre-reader builds confidence, we move to ending sounds working toward a firm concept of word. Evidence of the student’s understanding is his/her writing. You might observe squiggly lines. Then, you’ll see letter like figures, followed by the most identifiable sound in the word. Gradually, you’ll see beginning and ending sounds. By this point, the child is ready to begin reading.

Alphabet recognition is one goal for emergent readers.  Knowledge of the alphabet helps the student to make letter/sound match as they try to spell. Sorting different letter fonts is one option you can use, and you should practice the student’s name and the names in the classroom gradually building on the number of letters the child recognizes. Using environmental print such as McDonald’s or Wendy’s helps with letter name recognition too.

In addition to building letter naming skills, the teacher must work on developing a concept of word by having the students attempt to point to words as they recite memorized rhymes, jingles, simple pattern books, and short sentences that the class composes through shared writing. Fancy pointers are fun, and you can even find miniature flashlights to spotlight sounds or spooky fingers for added fun. Using nursery rhymes for COW works well to begin, but you might look at this set for inexpensive poetry you can use all year to match themes students at this stage enjoy.

As COW develops and the student builds letter identification skills, it’s important that the teacher model sorting pictures by initial consonant. Sort picture cards by initial consonant sounds and rime to focus on rhyming skills. Gradually add to the level of difficulty as you work with all five short vowel sounds and word families.

Begin by having the students contrast two distinct sounds such as B and S. Add additional sounds such as M and R, working up to comparing four sounds at a time. The progression you choose is important in that you want to have contrasting sounds. For example, comparing words that begin with N and M might be challenging since the sounds are formed similarly. Here is a sequence I’ve followed that works well. It was recommended in Words Their Way. Once a student recognizes a few consonants, he/she is ready to begin making words with short a.

As you work on the sounds above, you should encourage students to label their pictures with invented spelling. Certainly, we know they will be watching each other and will try to copy you as you model writing. Having fancy pens, stampers, chalk/chalkboards, and markers for kids to use encourages writing, and we know writing reinforces reading. Writing letters to friends, drawing and labeling, filling in a sentence frame, and making lists are just a few writing options that work well to solidify letter/sound relationships.

Finally, be sure to model how words can be segmented into sounds and match them to particular letters as you write for the children. This can be done as you write a “morning message” together, or as you write the children’s dictations under a drawing they have done. Have LOTS of chart paper on hand (old school…maybe, but guess what? Those chart paper samples make great souvenirs of learning for your students. Send them home to share with mom and dad.) Remember that any time you write in front of the students, you have an opportunity to show them how to listen for the sounds in words.

Certainly, these suggestions are just a start, but hopefully, it at least gives you a little framework of what word study looks like in kindergarten. In the last year, I’ve created a few resources specifically for kindergarten. Here are a few that support word study:

These alphabet paper bag books were created on the request of a kindergarten teacher who needed alphabet intervention materials. The books include letter formation, letter sounds, picture sorts by sounds, and draw/label activities. The bundle includes a book for each letter.

These paper bag books start with word building by sound (differentiated), picture sorts by sound (labeling could be added), sorting by family, and draw/label. The five book set is $10.00. They can be used with small group instruction throughout the week and be referred to after the books are made to reinforce patterns and sounds.

Finally, I have an alphabet remediation kit and a rhyming remediation kit that you might check out HERE AND HERE. Word work helps build foundational skills, and I hope this helps give you a clear word study plan.

Orton Gillingham Strategies in the Classroom

The Ultimate List of Teaching Ideas for the Emergent Readers

Reading Games to Motivate Your Readers 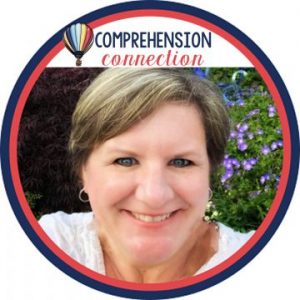 I'm Carla, the author of Comprehension Connection. I'm a recently retired Literacy Coach and TPT author. I'm a Wife to a great guy, Mom to two grown children and two fur babies. I'm a Virginia Blogger, a Travel Lover, a Coffee Drinker, and a Gal who loves All Things Techie.

The Virginia Lottery has sponsored a special progr

In my opinion, this is one of the best resources A

With the TPT sale in progress, I thought I'd share

Join my list and grab your copy of my Book Clubs Made Easy resource. This section includes over 170 units to go with your favorite picture books and novels.

In this category, you’ll find:

Planning for guided reading can be quite time consuming. Check out THESE RESOURCES to take a little off your plate.

My paper bag books address comprehension skills, alphabet recognition and sounds as well as word building. Click HERE to check them out.

Partner plays are fantastic for tutoring sessions as well as in your literacy workstations. Click HERE to see them all.

Poem of the Week Resources

Regardless of your students’ level, you’ll find poetry sets that they will love. These original poems include activities to support fluency and comprehension.

Students NEED a strong understanding of phonics and word knowledge to move along the reading continuum. Click HERE to access word building and vocabulary resources I have available.

Get the latest updates by following me on social media.

This website uses cookies to improve your experience while you navigate through the website. Out of these cookies, the cookies that are categorized as necessary are stored on your browser as they are essential for the working of basic functionalities of the website. We also use third-party cookies that help us analyze and understand how you use this website. These cookies will be stored in your browser only with your consent. You also have the option to opt-out of these cookies. But opting out of some of these cookies may have an effect on your browsing experience.
Necessary Always Enabled
Necessary cookies are absolutely essential for the website to function properly. This category only includes cookies that ensures basic functionalities and security features of the website. These cookies do not store any personal information.
Non-necessary
Any cookies that may not be particularly necessary for the website to function and is used specifically to collect user personal data via analytics, ads, other embedded contents are termed as non-necessary cookies. It is mandatory to procure user consent prior to running these cookies on your website.
SAVE & ACCEPT