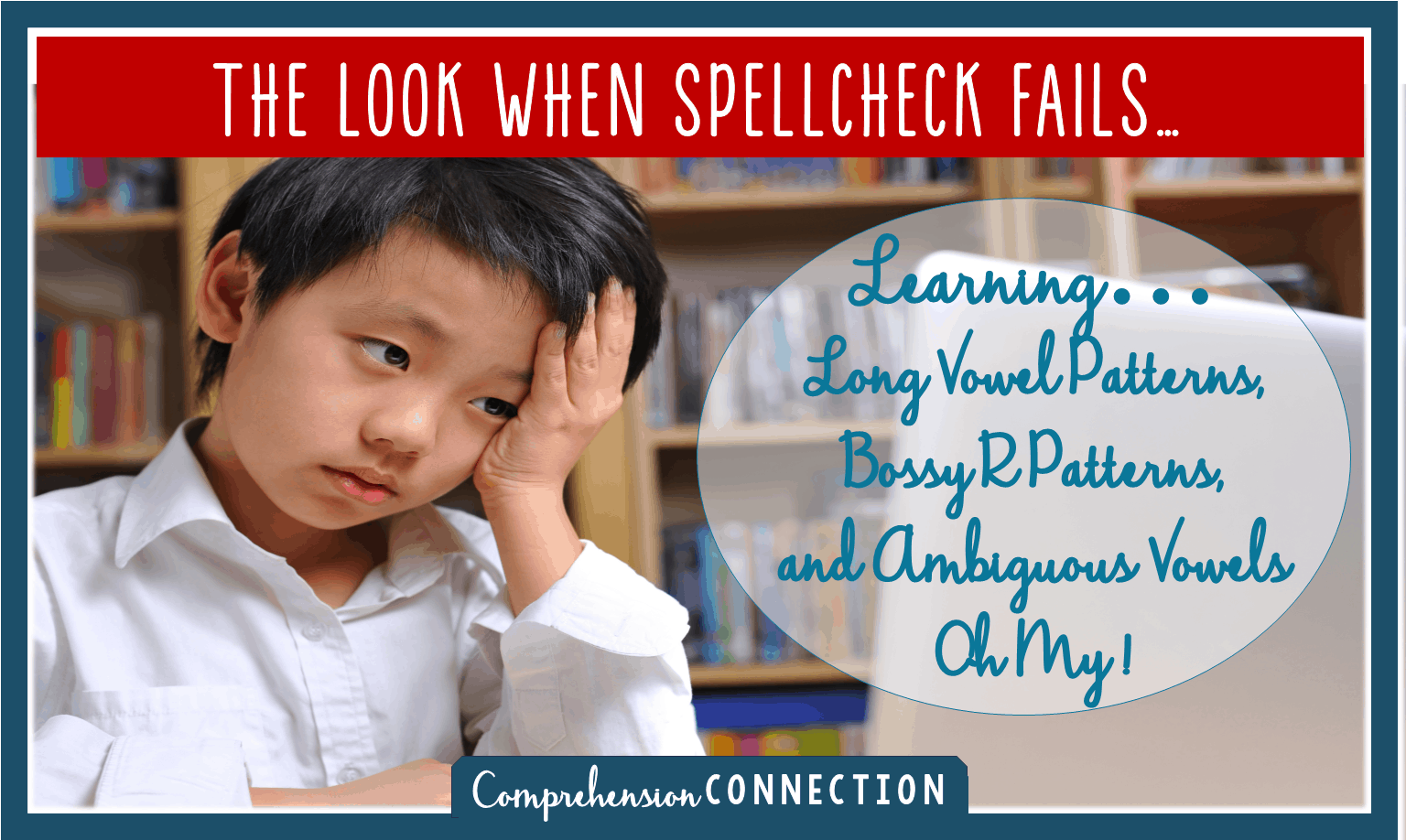 Quote for the Day

“Sometimes I spell words so wrong that even

If we can just get students to understand patterns, they will never have this difficulty, right? That’s the goal of the Within Word Stage and the focus of today’s post.
If you’re just joining in, this is the fourth post in my Word Study series. To catch the full series, you can [CLICK HERE]. Word Study Matters is the first post of the series. Now, let’s get started…

You’ve Assessed them. Now what?

Once you’ve ranked your DSA results from high to low and plotted the students’ performance on each feature, you can begin to form your groups. I typically run three spelling groups and stagger introduction days. My spelling groups tend to be in line with my reading groups, but on occasion, you’ll have a student whose spelling stage doesn’t match reading level. When that happens, I’ll pull the student for just the spelling portion of my small group. Word study takes about ten minutes. When I am working with my students, we discuss A LOT. I model segmenting phonemes, and we talk in depth about patterns in words. Students must SEE them and use them in their reading, writing, and sorting.

Within Word pattern spellers spell most short vowel sounds correctly and are representing blends, digraphs, and pre-consonantal nasals completely. Spellers ready for the within word stage are beginning to include silent vowels to mark long vowel sounds. These markers will be “used but confused” as in SMOAK for smoke, LITE for Light, TRALE for trail, SHIPE for ship, etc. Within word pattern spellers are readers who have observed silent letters within the words they are learning to read. They are putting together that patterns, as well as sound, rule how words are spelled in our language.

What’s Taught in this Stage?

The within word pattern stage is a long one that extends from late first grade to the middle grades in general. Remember that struggling readers as well as learning disabled students may enter/complete the within word stage later than the norm, but ALL students work through the stages in the same order. Word sorts are what we call the spelling list, and they are organized in a spiraling fashion where the student compares known patterns to the unknown, so there is constantly reinforcement of prior teaching. This solidifies understanding and helps the student apply their knowledge in reading and writing.

We begin the WW (Within Word) stage, with the CVCe pattern and contrast them with short vowel patterns using both pictures (which focuses attention on the sounds) and word cards (which reveals the spelling patterns). When working with word cards, try to include a sort that compares the sounds (such as short A and long A). Once the CVCe pattern is understood, we then move on to other long vowel patters such as A-E, AI, and AY.

Below is a suggested sequence for the study of common vowel patterns:

These pattern options are suggestions, but certainly, base your instruction on the needs of your students. You may find that you’re able to combine two vowel patterns together such as A and I (CVC/CVCe patterns). You will gauge the speed in which you progress through the stage on your students’ application of their pattern knowledge.

The long vowel patterns we include in this stage include the following:

If you opt to do the long vowel patterns first, you would follow these patterns.

Further study of consonant sounds will take place in this stage. Complex consonant clusters include three types: (1) three-consonant blends (scr, tch), (2) two-consonant units that result in the sound of one sound (ck, kn, gn), and (3) consonant/vowel units (dge). Vowels are influenced not only by silent vowel markers, but by consonant markers. For example, CK follows ONLY short vowel, and students learn that silent E can mark not only vowels but consonant sounds. E marks the letters G and C to form the soft sound in words. Here is the focus for this feature.

As you work through this feature, there are a few important teaching points you will want to be aware of. Consonant digraphs are two consonants together that make only one sound, and consonant blends are two or three consonants together with EACH letter sound voiced. It’s important that teachers are clear on the terminology so that terms are accurately communicated with parents and students. I’ve observed teachers not actually knowing the difference between them and calling a digraph a blend and confusing diphthongs with digraphs. Now, I’ll throw in another confusing point. There is such as thing as a digraph blend. It is a consonant digraph attached to another consonant such as thr or shr. The digraph makes one sound and the consonant makes another sound, and did you know that the digraph wh can only come at the beginning of a word and the digraph ck can ONLY come after a short vowel and at the end of a syllable or word. Wow…that is a LOT to absorb, so take baby steps with your kids.

There are also a few important rules with our soft consonant sounds. The letter g will make the sound of /j/ and c will make the sound of /s/ when followed by e, i, and y. If the letters a, o, or u follow g and c, you hear the hard sound. This was a big ah-ha moment today with my tutoring student. She had no idea. She quickly rattled off example words to me, so truly, this is good stuff!

Finally, let’s talk about using silent e. Did you know that words in English will never end in the letters j or v. When using the sound of /j/ at the end of a word, it must be spelled with g (followed by e,i, or y) or dge. The cluster, (dge) will only follow short vowels, and dge will ONLY come at the end of a word unless it’s a compound word.

Again, we do have important talking points to include with this feature. These vowel digraphs or diphthongs cannot be separated. The sounds are stuck together and the two vowels make one NEW sound separate from their individual sound like consonant digraphs.

Activities for Within Word Spellers

Remember that the sort is a key part of the word study process. On day 1, you must use direct instruction to explain, model, and practice the sort. Make sure that your students can read all of the words chosen for the sort and that they know the meanings of the words. Once the sort is understood, you can choose from other sorting options such as:

Because a student’s reading material typically matches fairly closely to spelling stage, you can use it, poetry, or short passages to reinforce recognition of patterns. Giving students a blank sorting mat or by drawing a grid in the word study notebook for recording words students find is typically how I’ve done hunts. Sometimes, I’ll do highlighter hunts or color coding in poetry or printed passages. We make it into a game like “I Spy”, so kids really enjoy them. You can challenge your kids to locate X number of words during their reading block. Use caution though…some patterns are easier to find than others.

Making words definitely works well with word study, and we make LOTS of words. In my small group lessons, I rapidly work on making and reading real and nonsense words. Nonsense words are important because they demonstrate pattern understanding. One really fun game I’ve done with my students is to place onset and rime cards face down, and kids will flip up one of each to see if it makes a real word or nonsense. If it’s real, they keep it and count them up. Child with the most real words wins. You can follow this quick paced game with discussion of patterns they’ve made and sort them even.
Push it-Say it is another great activity. You can build words with magnetic letters or word chunks and read in chunks. I like using this activity because students can look for chunks in their reading and with longer words. Even though words in this stage are one syllable, students are normally able to read some 2 and 3 syllable words and recognize patterns within them.
Studying the configuration of words using Elkonin boxes is another option for making words. For students who are tactile learners, Elkonin boxes can be helpful. This might be an activity done for independent practice.

Due to time constraints, there are times when I don’t meet with all of my spelling groups. I do it on a rotating basis to make sure I’m following behind my kids to check and monitor their work. On these days, center games and activities are perfect. There are printable games that come with the Words Their Way book or they’re described in the book, but you can also find lots of games through TPT. On TPT, there were 6000 long vowel games alone. You can also find them on sites like Adrian Bruce or Florida Center for Reading Research.  Want to include technology? No problem. Check out these links:

There are a few other reading specialist bloggers who have written up posts about word study. One blog I love is This Reading Mama. This link to her word study series may provide additional details I may have overlooked. I also found this series from The Measured Mom. You may want to look through her information as well. 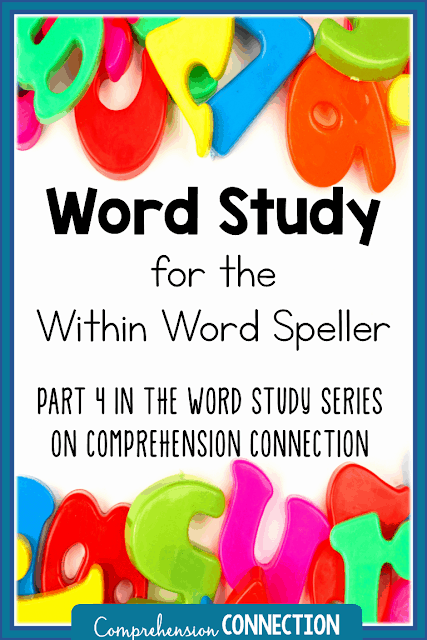 Thanks for joining me today. If you have questions, do not hesitate to ask. If I don’t know the answer, I’ll try to find it for you.

Previous Post: « Word Study for the Letter Name Speller
Next Post: Why Writing *Must* Be Part of your DAILY Routine »

I'm Carla, the author of Comprehension Connection. I'm a recently retired Literacy Coach and TPT author. I'm a Wife to a great guy, Mom to two grown children and two fur babies. I'm a Virginia Blogger, a Travel Lover, a Coffee Drinker, and a Gal who loves All Things Techie. 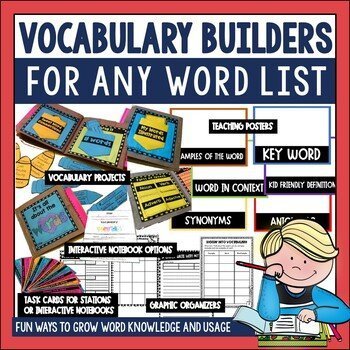 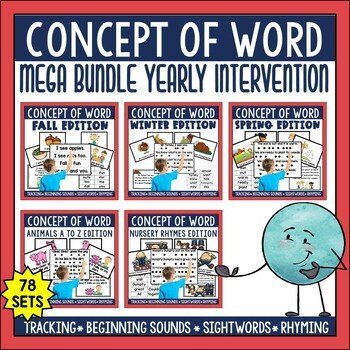 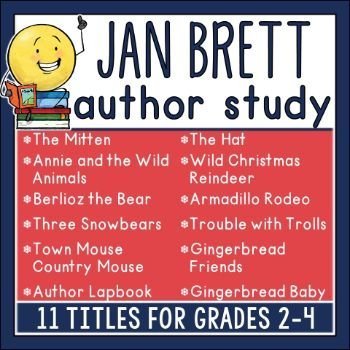 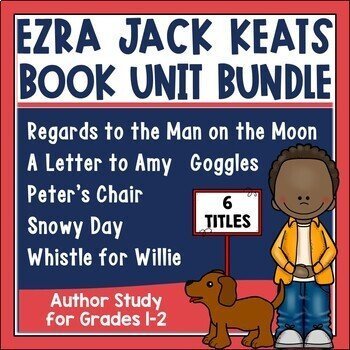 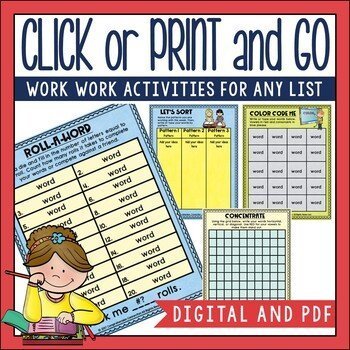 Spelling Activities for Any Word List
25 Activity Options in PDF and Digital
$7.00 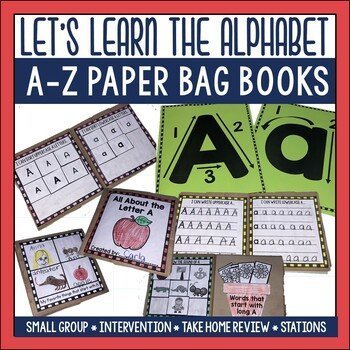 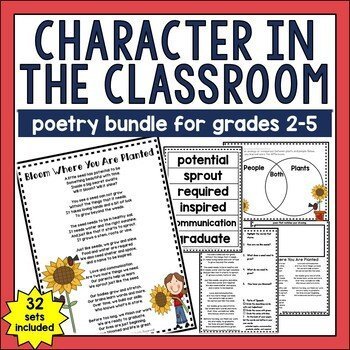 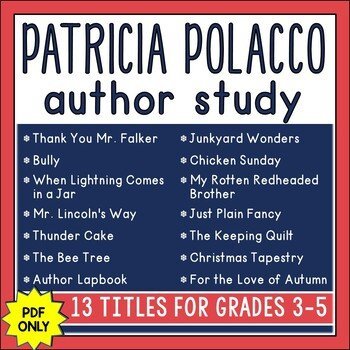 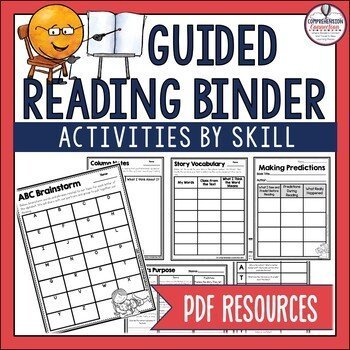 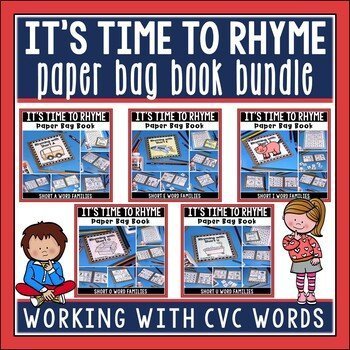 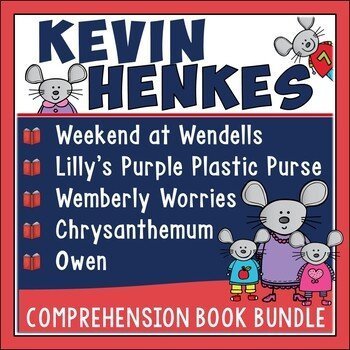 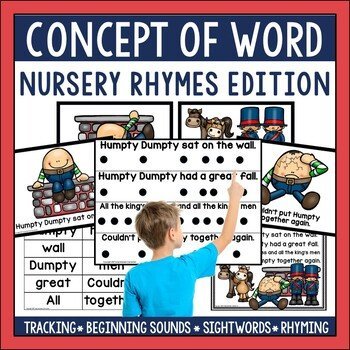 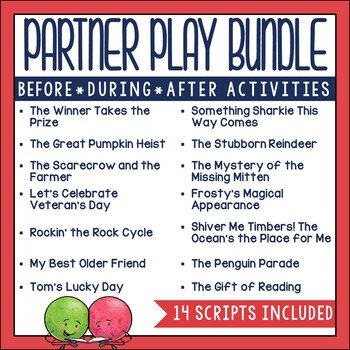 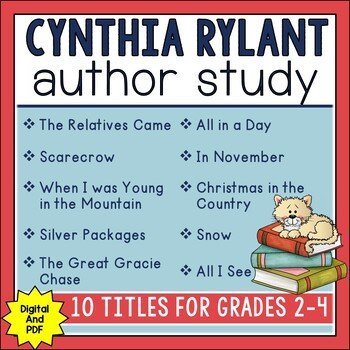 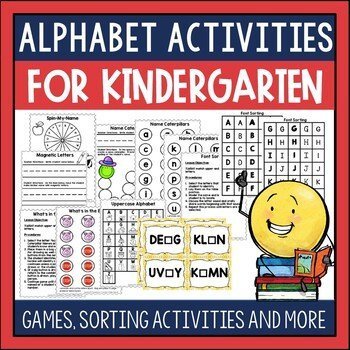 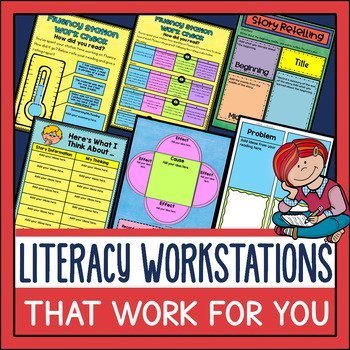 Literacy Workstations
Activities in Digital and PDF for All Areas
$8.00

Gain access to my resource library and get news right in your inbox! 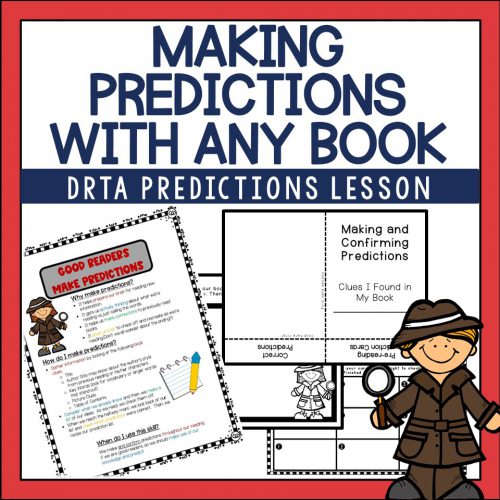 Join my mailing list to receive the latest news and updates from my site. I am offering a free download of my Making Predictions Resource to everyone who subscribes today!

Man, January is kicking my tail. I just seem to be

7️⃣ Ways to Teach Questioning Skills in Any Gr

Reading Games to Motivate Your Readers. I have n

Last week, I shared an article from the Wall Stree

Today's Freebie Friday in our Facebook Group for L

Poor Bernie! We could have helped him out! Next ti

Any cookies that may not be particularly necessary for the website to function and is used specifically to collect user personal data via analytics, ads, other embedded contents are termed as non-necessary cookies. It is mandatory to procure user consent prior to running these cookies on your website.

We all love a discount. During the month of January, you can save 10% with the code: SNOWMUCHFUN